Indonesia Geothermal System distribution is strongly controlled by the geology and tectonic setting of the region. This causes, each geothermal system found in this country is unique and vary from place to place.  Currently 331 geothermal occurrences and prospects have been mapped by Geological Agency, Ministry of Energy of Mineral Resources Republic of Indonesia (see Figure 12). 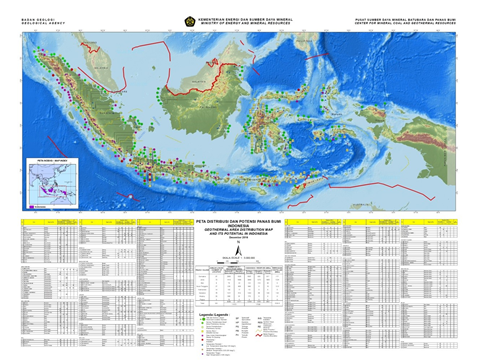 The geology and tectonic setting that form Indonesian Archipelago start as early as Cretaceous age as part of geology and plate tectonic evolution of SE Asia and the SW Pacific (Hall, 2002). The Present day major geology and tectonic framework is shown in Figure 13. It is the result of evolution of subduction zone and its associated magmatic arc since Cretaceous until now, as shown in Figure 14 (Katilli, 1994). It is an extremely complex collection of continental blocks, active and extinct volcanic arcs and associated subduction complexes and old and young ocean basins that form the major tectonic framework of Indonesia. Now, the region is at the convergence of three major tectonic plates: Eurasia, Pacific and Indo-Australia. 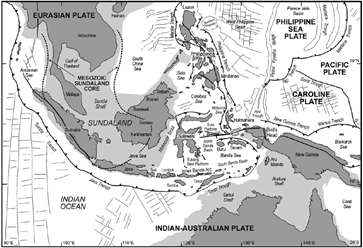 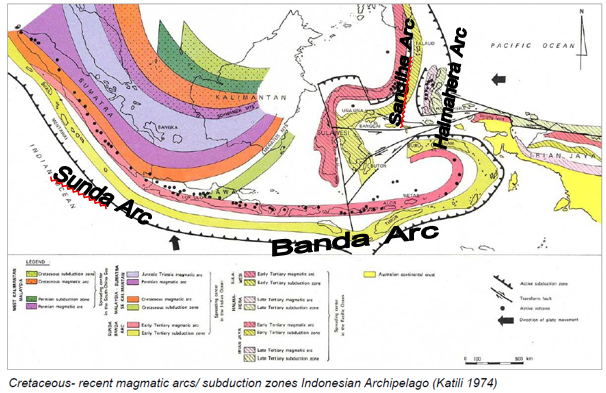 The present day subduction zones, as the result of the movement of three plates, give rise to four active volcanic arc segments. Those are Sunda Arc, Banda Arc, Sangihe Arc and Halmahera Arc. The Sunda and Banda Arc are related to the same subducting Indian Ocean plate (part of Indo-Australian Plate). About 128 active or dormant and many additional extinct volcanoes have been identified along these arcs. The chemical and physical characteristic of the volcanoes at the western and eastern Indonesia are often different that affect the characteristics of volcanic or magmatic associated geothermal system in these areas. Currently, geothermal system associated with volcanism or magmatism are the most exploited resources in this country.

Old subduction zones form tectonic suture that aged from Cretaceous or older. The sutures mostly found in Kalimantan.  In Kalimantan, also known as Borneo, uplift, crustal thickening, thrusting and folding occur in many areas. Several major sedimentary basins that produce oil and gas, as well as coal have been found in this island. Several geothermal occurrences, which are indicated by the appearance of warm to hot spring, have been identified. Nevertheless, the association of geothermal heat source with geology of the area has not been well understand. These geothermal occurrences are potential for development of medium to low enthalpy geothermal energy. 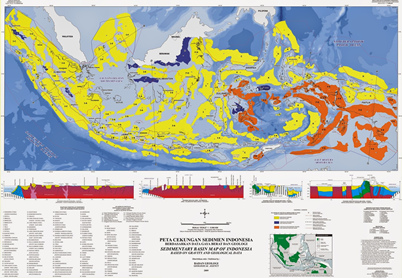 Geothermal system can be associated with extensional tectonic regime. The occurrence of segmented strike slip faults controls the geometry and permeability of geothermal systems. Several major Young active strike slip faults have been mapped in this country and some of them have been proved to be associated with geothermal system such as Great Sumatran Fault, in Sumatra Island, Palu Koro Fault and its slay to the SE, in Sulawesi, and Cimandiri Fault in West Java. Other possibilities such as Sorong Fault in West Papua and other major fault system has not been investigate yet.

Conduction dominated geothermal type can also occur as in association with old or young orogeny tectonic. Four Orogenic Belt Type have been identified in Indonesia (Simandjuntak and Barber, 1996) shown in Figure 16.  They are (1) Sunda Orogeny located at Java Southern Mountain Ranges – Sumatera Barisan Mountain Ranges, (2) Banda Orogeny, located in Sulawesi Mountain Ranges, (3) Melanesia Orogeny in West Papua – Papua New Guinea Mountain Ranges and (4) Talaud Orogeny which is spread at Talaud – Tifore ridge. Nevertheless, the geothermal potential associated with this system has not been investigated yet. 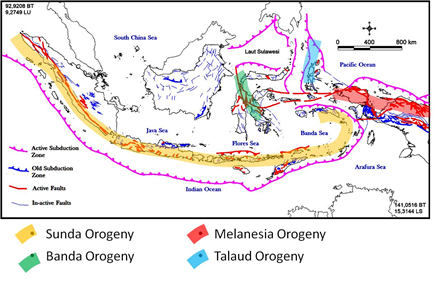