GEOCAP is a bilateral program between Indonesia and the Netherlands that has been running since 2013 as a public-private partnership involving universities, knowledge institutes and companies from both countries. The prime objective of GEOCAP was to contribute to the development and uptake of geothermal resources in Indonesia particularly in the new to be developed areas outside of Java. For this purpose an elaborate and advanced state-of-the-art training and research program has been developed focusing on issues related to exploration, production, governance, legislation and environmental issues involving the full chain from exploration through project development to exploitation. This focused not only on energy generation but also on direct use applications of geothermal resources. Within the 8 targeted training work packages, training materials were developed and subsequently train-the-trainer workshops were given to empower the next generation of geothermal tutors with state-of-the-art education materials. These were used to assist universities, technical and vocational education and training centres to develop their curricula in geothermal. Research has been focused on real-world problem solving in the context of uptake of geothermal resources in Indonesia. This Handbook is a preliminary version of an education package that will be provided in fall of 2018 for geothermal training institutes to be used  to develop and enhance their curricula.

This results of the project is presented in this handbook based on their themes. There are seven themes included in this book

The bigger picture of all this effort is combating climate change in response to agreements made in Paris in COP21. Our climate is changing, global temperatures are rising, more frequent and severe hydro-meteorological disasters occur as a result of atmospheric CO2 emissions in large related to fossil fuel burning. Energy transition to renewables is one way to mitigate this and reverse the trend. Besides hydro, solar and wind energy, geothermal energy generated from the natural heat of the earth is an potential source of renewable energy. This is largely confined to areas with high heat flows which are typically areas in geologically active zones such as the subduction zone of Indonesia is. 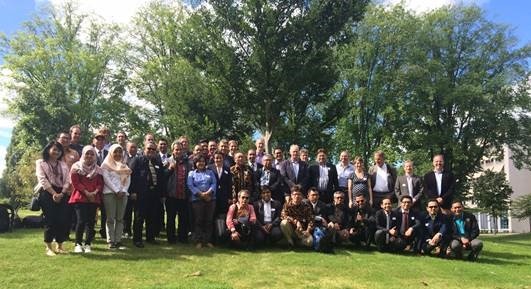