Sedimentary basins offer a huge geothermal potential for direct heating and even power generation. In order to quantitatively estimate the resource potential, a solid understanding of the subsurface is key. This includes the depth, thickness and structure of the geothermal reservoir, tectonic history, temperature, and flow capacity of the reservoir. The resource assessment course explains what data are typically required, how to calculate the geothermal potential from a variety of possibly available sources of data using state of the art techniques and freely available software, and how to assess the uncertainty of the estimate. 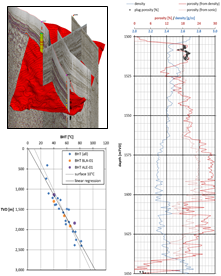 (top left) Borehole data, preferably in combination with seismic, provide a first estimate of depth and thickness of the geothermal reservoir

(bottom left) Bottom hole temperatures are routinely collected in exploration wells. Usually a linear trend exists in sedimentary basins, but considerable deviations from this trend may occur. A 5 °C difference at 2500 meters results in 10% difference in energy yield for a dT of 50 °C 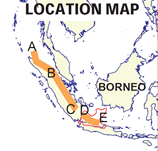 Figure 17 Figure showing generalized sedimentary basins in Sumatera and Java (after Bishop, 2000, based on Pertamina 1996 and others

A one-week course on geothermal resource estimation for low and medium enthalpy sedimentary basins was developed. To goal of the course is to enhance the participants knowledge and skills on assessing the geothermal potential in sedimentary basins for low and medium enthalpy resources using seismic interpretation techniques, petrophysical analysis and doublet performance software tools. Given a variety of possible subsurface data types, the audience is guided through the entire workflow from modelling the architecture of the reservoir, selecting the most favourable layer, assigning the relevant properties and finally calculating the potential geothermal power, including the uncertainty. The target groups of this course are practitioners (industry) and trainers / lecturers (academia). Those wishing to enrol should hold at least a BSc in geology, geophysics, geochemistry or comparable.

The course evolves around the following topics:

Each topic is introduced by morning lectures, followed by hands-on exercises using real field data in the afternoon.

The objective of this module is to learn how to calculate the reservoir properties that are relevant for geothermal flow. To this end, coreplug data and geophysical wireline logs are used, including gamma ray, sonic velocity and density logs. Porosity and permeability are calculated. Various techniques are used in order to understand the uncertainty of the calculated porosity and permeability. The concept of bottom hole temperature acquisition will be explained, and the correction and use of those data for estimating the temperature gradient. The influence of different choices on the geothermal power prediction will be discussed.

The objective of this module is to explain how borehole and seismic data can be used to model the depth, thickness and faults of the geothermal reservoir in 2.5 or 3D. The basics of seismic data acquisition will be explained, reflection and refraction, passive and active seismic, and time-depth conversion. The use of seismic attributes for deriving properties will be explained, and advanced filtering techniques for improving the quality of the data.

A geothermal model is required for predicting the potential flow, temperature and power of a doublet, prior to drilling for determining if an economic doublet is possible. After drilling, the model needs to be adjusted to the newly acquired data.

Using field data (seismic, well data, logs, temperature and permeability measurement), a simple geothermal model architecture is built which will be populated with the relevant properties (Net-to-Gross, temperature, permeability, or possibly dual permeability when relevant). Since the data is sparse, interpolation algorithms (IDW, Kriging, Simulation, ..) need to be used in order to derive property estimates for the whole reservoir. This introduces uncertainty, the role of which will be discussed.

For optimal and sustainable doublet performance, the geothermal field needs to be modelled in order to be able to study the effects of pressure change and cooling, including thermal breakthrough. Various scenarios can be modelled to study the potential lifetime of the doublet, for instance including sealing or open faults or high permeability streaks.

During the course, the open source model software DoubletCalc (1D and 2D) will be used. DoubletCalc 1D is a pre-drill geothermal flow modelling too. It calculates flow rate, geothermal power and COP based on a 1D estimate of reservoir properties and well architecture. Hence, it can be used to determine whether a doublet could in principle be economical. The influence of uncertainty on the geothermal power can be studied in an interactive manner. DoubletCalc 2D is an easy-to-use reservoir simulator that calculates changes in the pressure and temperature fields due to geothermal production. Different scenarios can be modelled, including the influence of flow barriers and heterogeneity, well planning, and assessment of uncertainties.

Figure 19 Reservoir cooling and pressure and temperature development modelled with the DoubletCalc2D software, showing cooling and reheating after production stop