The transfer of in-depth knowledge and skills to conduct a quantitative analysis of the thermo-tectonic structure, composition and evolution of sedimentary basins is critical for acquiring a solid understanding of the potential geothermal energy resources in basins. This quantitative basin modelling course uses advance knowledge and state-of-the-art technics from geological characterisation and modelling using selected case studies of low- to medium-enthalpy geothermal systems. 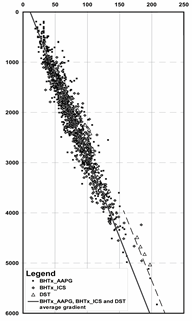 RELEVANCE FOR AND APPLICIBILITY TO INDONESIA

The current geothermal prospects in Indonesia are linked directly to the distribution of volcanic systems, as shown in the figure below. The development of geothermal energy in the non or less volcanic active parts of Indonesia, such as Kalimantan, eastern Sumatra, western Sulawesi and Irian Jaya, will therefore have to focus on geothermal prospects that potentially are present in sedimentary basins systems in those areas. 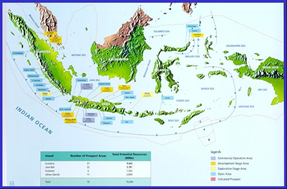 Training courses such as the Geothermal Basin modelling course may provide an excellent opportunity to increase in an efficient way the knowledge and skills that are required for a solid quantitative assessment of the geothermal power from sedimentary basins across Indonesia.

The project has developed a 1-week basin modelling course presents a precise overview on the characterisation at regional scale of basin structure, evolution, and composition to allow the participant to understand the overall complexity of sedimentary basins: from their geodynamical context to basin structuration and composition. Given the target audience (academics, industrials, and governmental) and the wide range of specialities (geology, geophysics, and engineering) the course first covers basic knowledge before going into more details regarding geothermal characterisation. The course is developed and given by geological and geophysical experts from The Netherlands and Indonesia.

The course is articulated around three main modules:

A special topical session on enhanced geothermal systems (EGS) in extensional sedimentary basins is also included in the course.

Each module starts with a lecture that aims to provide the participant a solid foundation of the fundamental aspects. The lecture is followed by exercise(s) designed to provide a thorough understanding of the different aspects introduced during the lecture.

1- Geodynamics and thermal structure of the lithosphere

The objective of this module is to understand the impact of the plate tectonic and lithosphere movements at very large scale on the development of sedimentary basins and geothermal occurrences in various basin environments. Building on the knowledge of geodynamic, the characteristic of anomalous thermal condition that provides geothermal interest are introduced and explained. 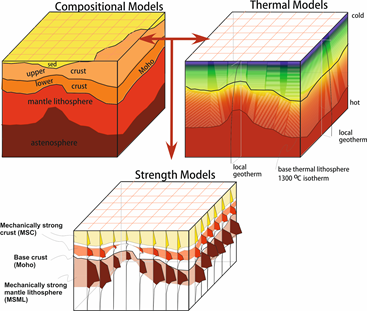 (top) The key geodynamic and plate tectonic processes that control the structural and temperature evolution of the Netherlands (situated at a continental passive margin) and Indonesia (situated in an active subduction zone with volcanic arc). Source:

(left) Variations in lithosphere and crustal thickness created by geodynamic processes strongly affect the temperature distribution, and consequently the 3D thermo-mechanical strength distribution. This in turn controls the formation and evolution of sedimentary basin systems. (after Cloetingh et al., 2005)

2- Characterisation and formation of sedimentary basins

This module aims to develop the understanding of the impact of large-scale processes on the development of sedimentary basins in different geodynamic and tectonic settings, like for instance extensional basins formed at passive margins and back-arc basins formed in subduction systems. Also addressed is the impact of the large-scale processes on the thermal structure of the lithosphere, crust, and sedimentary basin systems. 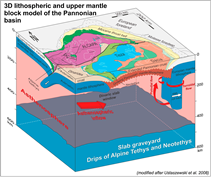 The Pannonian Basin in Europe is a complex back-arc basin that has undergone various phases of extension and compression. (after Horvath et al., 2015) 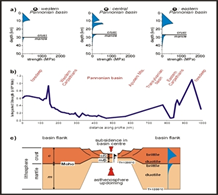 3- Thermal evolution of a sedimentary basin

Building on the understanding of the geological context that allow the formation of sedimentary basin and the way they develop, we then develop the understanding on the geothermal specific aspect of this structure and development. Based on the case studies situated in the Netherlands and the Pannonian Basin (figure below) the knowledge of building the thermal structure has been first presented and then used for a practical case scenario, incorporating all regional scale geological complexity. 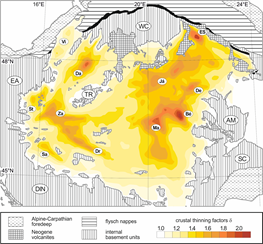 The complex evolution of the Pannonian Basin resulted in considerable variations in crustal thinning across the basin (after Cloetingh et al., 2006) 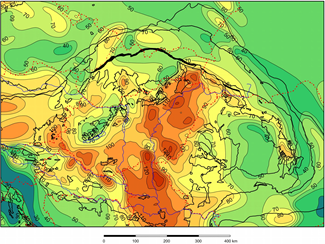 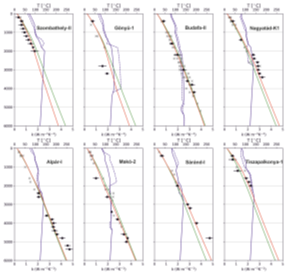 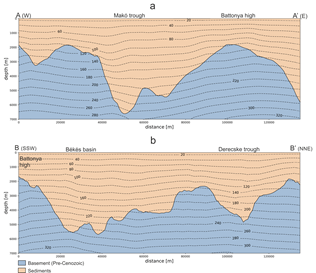 Modelled isotherms across the Hungarian part of the Pannonian Basin. The results suggest that the hottest areas below 3 km are linked to the basement highs surrounded by deep sub-basins of the Great Hungarian Plain. (after Bekesi et al., 2017).