Geothermal direct use dates back thousands of years, when people began using hot springs for bathing, cooking food, and loosening feathers and skin from game. Today, hot springs are still used as spas. Nevertheless, there are now more sophisticated ways of using this geothermal resource.

In modern direct-use systems, a well is drilled into a geothermal reservoir to provide a steady stream of hot water. The water is brought up through the well, and a mechanical system - piping, a heat exchanger, and controls - delivers the heat directly for its intended use. A disposal system then either injects the cooled water underground or disposes of it on the surface.

Geothermal hot water can be used for many applications that require heat. Its current uses include heating buildings (either individually or whole towns), raising plants in greenhouses, drying crops, heating water at fish farms, and several industrial processes, such as pasteurizing milk[1].

Worldwide two main types of geothermal use can be found:

Within the GeoCap program, the potential for direct use was studied in more detail, especially for process heating, both from the resources side and from the point of view of the market. Considering the relatively high outdoor temperatures in Indonesia, it is anticipated that most heat demand is for process heat in agriculture and industry. Space heating is not a market. We focussed on western Java, because a) we had access to data for this area, and b) because most of the heat demand in industry is located in this area.

These resources are found all over western Java, depending on the local volcanic activity. The known resources have been listed. A summary can be found below. 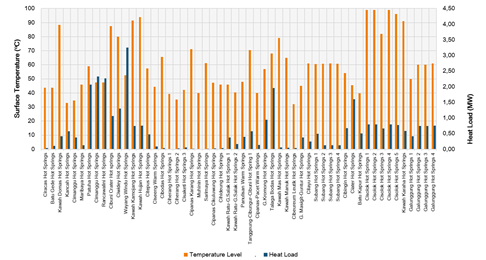 The data show that most resources have a thermal power between 100 kW and 3 MW, and a temperature level between 30 and 100°C.

Geothermal power plants do not use all the heat for electricity production. There is still (waste) heat in the brine and condensate. The existing power plants on Western Java are shown below, and the characteristics of the waste heat available are depicted in the figure below that. Available temperature levels are between 45 to 175°C at a thermal power of 20 to 185 MW. 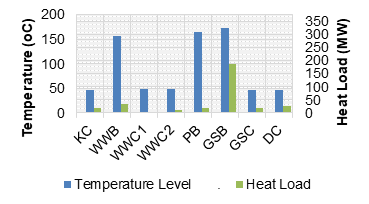 Both types of direct use resources mentioned above are related to volcanic activities. The locations of these resources are strongly dependent on certain geological conditions. The location of the resource will determine the possible locations of the heat demand. For sedimentary basins, this is (at least partly) reversed: the location of the demand determines where we look for a resource. The largest heat demand for process heat is found around Jakarta, Bandung and Surabaya. For the Jakarta area, the sedimentary basin that is in the subsurface has been drilled extensively for oil and gas. From these data, we know that there are several reservoirs that have significant potential for low/medium enthalpy geothermal heat production. These reservoirs have been mapped, and some of these mapping results are shown below.

The market can be split up in existing projects, and potential new projects.

Existing projects are listed in the table below. All projects are based on surface manifestations or waste heat resources.

Below a map is given of West Java with some potential direct use that can be found in this area. 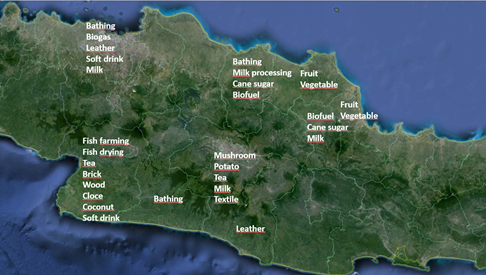 Figure 62 Potential direct use markets and locations in West Java

Almost 60% of processing industries in Indonesia are located in West Java province. Nearly all of them need heat for product processing. The majority of industrial energy demand is for heat. Heat is integral to many industrial processes including melting, drying, frying, pasteurising, and distilling. Each of these processes uses heat at a temperature specific to the materials involved and the product being manufactured. Current situation in West Java province, almost all heat demand is supplied by coal combustion, oil, solar, gas, and electricity. Very few of of them use geothermal as heat supply for their industrial processes.  The northern area of West Java has become a major industrial area. Areas such as Bekasi, Cikarang, and Karawang are sprawling with factories and industries, such as textiles, processed food, wood carvings and furniture, paper, chemicals, etc.

Match of market and resources

Most surface manifestations are relatively small in geothermal power. Only heat demand that is located very close to the source can be matched. Most interesting market for use of surface manifestations is for bathing, hotels and spas. The impact of this kind of direct use on the local economy may be very positive, but the impact on the energy picture of Indonesia will not be significant due to cheap of domestic energy prices. 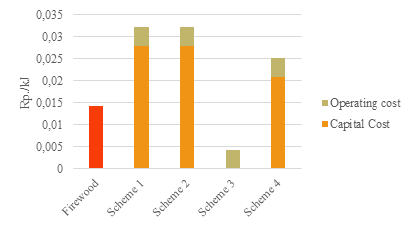 Figure 63 Energy cost comparison of each scheme with firewood.

This shows that the investment costs are too high to get a positive business case wrt to the reference case of burning wood for the heat. The main cause is the very low price of heat from wood burning. A price of 0,015 Rp/kJ is about equal to 1 euro/GJ. The wholesale market price for gas is above 3 euro/GJ. So compared to gas, direct use in this case is feasible, but not compared to wood burning. The only realistic way forward under current market conditions would be that the investment in the installation is done entirely by the geothermal power company as a CSR project to involve the local citizens in a positive way. In addition, the use of geothermal heat for the production of vertiver oil was studied, with similar results: the project will only be feasible when the project is realized as a CSR project, with full coverage of the CAPEX by the geothermal power company.

As mentioned above, the largest industrial heat demand in Indonesia is located in the area of the Jakarta basin. Here geothermal reservoirs can be found that have the potential to produce a large amount of geothermal heat. For the production of hot water of temperatures of up to 90 °C, this can be done economically under current market conditions (approx. payback time = 7 years) For the production of steam, the payback time is longer, due to the fact that steam heat pumps have to be incorporated in the process. The price of heat made using natural gas is relatively low in Indonesia. This makes it hard for geothermal heat to be competitive.

Currently geothermal direct use is competing against low priced heating fuels like wood and natural gas. As long as the prices of the reference are low, the penetration of geothermal direct use will be limited to a few cases where the heat is (almost) free and where the heat demand is very close to the geothermal resource. In the long run, we anticipate that costs of CO2 emissions from fossil fuels and scarcity of wood from local forests will have an impact on the business case of direct use. Therefor we anticipate that geothermal direct use will be a very valuable asset for the Indonesian economy in the years to come. To be able to utilize geothermal heat, it is advisable to create a regulatory framework that fits with this market and technology. In addition, to demonstrate the technology/market, it seems appropriate to start full-scale demo projects that would convince investors to apply the technology in the future.