Historically, the survey and exploration of geothermal energy in Indonesia started in 1918, and the exploration drilling started in 1926 by the Dutch government in the Kamojang area of West Java. There were 5 wells drilled, and 4 wells were then abandoned and there is only one well KMJ-3 still exists and flows until today as shown on the Figure 9. In other word, it has been more than 90 years the renewable energy activity took place in Indonesia. 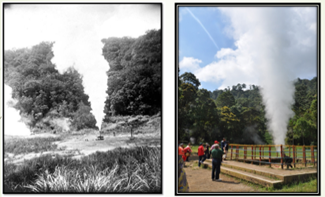 This is the beauty of the renewable energy that sustains for many years and it is obvious that the geothermal energy is one of the best source of renewable energy to provide power in the current condition and for the future. The geothermal energy can also be utilized as a direct use in providing the heat steam or source for many applications such for drying agricultural produce.

As one of the renewable energy sources, geothermal energy is also known as the clean energy that produce almost zero CO2 and environmentally friendly that will support the world program for CO2 emission reduction as agreed in the COP21 Paris back in 2016.

The first geothermal power plant which was for only 0.25 MW as a pilot project in the Kamojang field, installed and inaugurated by the government of Indonesia in 1978. See Figure 10 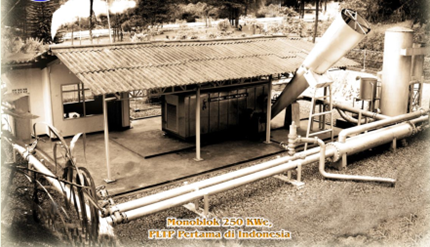 However, the real development of indirect use geothermal energy or steam to produce the electricity commercially in Indonesia has begun in early 1980 by Pertamina (State Owned Oil & Gas Company) with the assistant from New Zealand government, where finally the first geothermal power plant with the capacity of 30 MW installed in 1983 Kamojang, operated by Indonesia Power (IP), a subsidiary of PLN as the State Owned Electricity company. In this case, Pertamina just sold the steam to IP, whereas the power plant was owned by IP including its operation. During 1983 until 2015, Pertamina Geothermal Energy (PGE) has successfully developed the Kamojang geothermal field with installed capacity now reached 235 MW.

The development of geothermal energy in Indonesia was based on the Presidential Decree N0. 16 year 1974 by giving authority to Pertamina to carry out the survey and exploration on the Geothermal Energy. The decree was then replaced by the Presidential Decree no. 22 year 1981, which authorized Pertamina to carry out exploration and exploitation and to sell the electricity from geothermal including authorization to form a Join Operating Contract (JOC) with other private developer. Since then geothermal development moved with the development of Drajat field with installed capacity off 270 MW in early 1990 through 2007 and Salak field with installed capacity of 377 MW also in early 1990 through 1997 by Chevron.

Through survey in more than 300 locations around Indonesia’s islands by Badan Geologi (Geological Agency of Ministry Energy and Mineral Resources (MEMR), it was predicted that the geothermal potential is about 29 GW see Table 1. 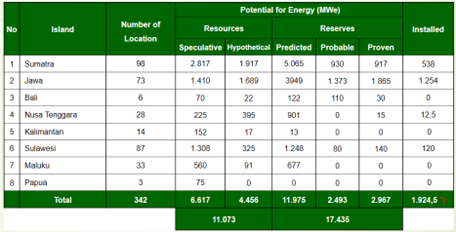 After the world crisis in 1998, the geothermal development then start progressing again and the Law No. 27 on geothermal was then issued in 2003, by giving the authority to the Local Government to Carry out the tendering process for indirect utilization of geothermal energy. Nevertheless, due to the lack of experience of the local government and due to geothermal is classified as mining activity, the problems occurred in developing geothermal energy and that the geothermal activity may not be carried out in the forest particularly in the conservation forest. It has caused the government to revoke the Law No. 27 year 2003 on Geothermal and then replaced with the Law No. 21 year 2014 on Geothermal where the word mining is omitted and gave permission for geothermal energy to be developed in conservation forest and the Geothermal business for indirect use was returned back to the Central Government.

However, please note since the Law no. 27 / 2003 was issued only few blocks were in progress to be developed, among others Muara Laboh, Rantau Dedap and Sorik Merapi. Therefore, the current total installed capacity was mostly from the Geothermal Working Area (GWA) that was assigned to Pertamina.

When the introduction was being prepared, the Lumut Balai of PGE is scheduled for COD for 55 MW in the 4th Quarter of 2018, the Muara Laboh development is in progress, that is scheduled to be COD in Mid 2019 for 80 MW, and the Sorik Marapi Modular Unit 1, will be COD for 20 MW in Mid-2018, and will be followed with Modular Unit 2 for 30 MW at later date. 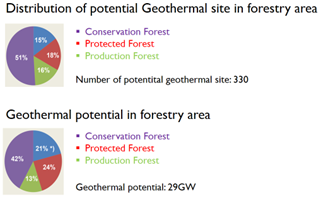 The current installed capacity through June 2018 was 1948.5 MW as shown in Table 2. Which made Indonesia is now as second largest geothermal producer in the world. 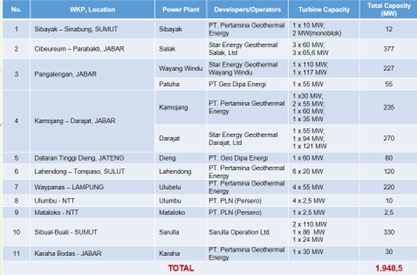 Through the Government Regulation No. 79 year 2014, on the Energy Mix Policy, it was determined that 23% of the energy mix must come from renewable energy by 2025. Out of 23 %, geothermal is dedicated to about 12%, which is approximately equal to 7000 MW to be developed by 2025. In other word, approximately 5000 MW need to be developed up to 2025. It has attracted attention on the need for Human Resources to support such huge development. In the past, geothermal development was moving fast and resulted shortage on expertise and enough experience human resources to support the target development by 2025. It is therefore, the program on capacity building became necessary, which lead to GEOCAP (Geothermal Capacity Building Programme Netherlands – Indonesia) which is part of the Human Resources Capacity Building in the Geothermal Sector in Indonesia.

Table 3 showed the requirements of the Human Resources through 2025 as the result of the study by a consultant from New Zealand for BPSDM (Badan Pengembangan Sumber Daya Manusia/The Agency for Human Resources Development) of Ministry of Energy and Mineral Resources.

Table 3 The manpower requirements for geothermal development up to 2025 (source: BPSDM - ESDM)

GEOCAP focuses on the capacity building with three major programs: (1) Training, (2) Research and (3) Database, which will be described in detail in section 4. This is a bilateral cooperation between two countries, the Republic of Indonesia through Bappenas and The Kingdom of the Netherlands through the Netherland Embassy in Jakarta for 5 years that was started in the beginning of 2014 and will end in December 2018 (the project was initially 3.5 years and it was extended to give ample time for the training implementation, Database development and also the research program).

The handbook contains the summary of the Geocap Projects for the past 5 years to be presented to the geothermal community for their references and information should they need to know more detail on the capacity building that have been accomplished by the Geocap team.

GEOCAP team wishes that this book would be helpful and useful for the Indonesian Geothermal Community to look for or to get the information on the training programs, result of the research, and the Database for the successful of Indonesia Geothermal Development toward 2025.