Our climate is changing! This in itself is not shocking nor surprising. Over geologic history, the global climate has always changed with warmer and cooler periods than the present period. The past 600.000 years we have had four glacial periods with large parts of Europe covered by ice and three interglacial warmer periods. Technically, at present we are at one such warmer interglacial periods. Carbon dioxide, CO2 concentration in the atmosphere and temperature have tracked closely over the last over the past 300.000 years as concluded from ice core analysis of the Antarctic. However, since industrialization this correlation has been lost due to the human-induced excess of CO2 emission to the atmosphere. The most optimistic climate scenario predicts a 4-degrees temperature increase relative to present day while the most pessimistic climate scenario results in 12 degrees of warming in 2100. If we do not act now (https://www.ipcc.ch/report/ar5/).

In Paris in 2015 politicians signed the so-called Paris Agreement during the COP21 meeting (http://www.undp.org/content/undp/en/home/presscenter/events/2015/december/COP21-paris-climate-conference.html). In the Paris agreement, for the first time in over 20 years of UN negotiations, countries ratified an agreement ‘to achieve a legally binding and universal agreement on climate, with the aim of keeping global warming below 2°C.’ This 2°C is about the level of warming reached after the start of industrialization.

COP21 is an agreement to undertake ambitious efforts to combat climate change and adapt to its effects, with enhanced support to assist developing countries to do so. In summary:

Over 90% of CO2 emission to the atmosphere is from fossil fuel burning. A back of the envelope calculation learns that if we continue emissions at the present pace we will have reached this maximum CO2 concentration by 2050. Thus we have 30 years to make our energy production CO2 neutral which requires a massive transition from fossil fuels to renewables; the energy transition. This is a wicked problem, as it does not only imply energy transition towards renewables but this in the context of an ever-increasing demand of energy with the increase of global population. It is predicted that the energy demand in 2035 will be double that in 1990. Energy transition is one solution, however CO2 capture and storage is an option that the Dutch government is seriously considering. CO2 is captured at the source, compressed and transported through pipelines and stored in geological (former oil and gas) reservoirs. This may have some environmental issues associated with it such as the risk of fault (re-)activation and potentially causing both leakage and induced seismicity and the fact that CO2 partially dissolves in time thereby potentially increasing the acidity of the water.

Global warming has resulted in additional challenges our planet is facing. The ESA Cryosat satellite mission[1] has shown that the Arctic sea-ice extent has shrunk by 12% per decade since 1978. Satellite missions such as NASA’s OMI and ESA’s Tropomi[2] allow to measure atmospheric constituents related to air pollution at detail and link them directly to potential sources of the pollution showing increases in various greenhouse gases in the atmosphere. A global network of tide gauges has revealed the increase of sea-level height throughout the 20th century because of thermal expansion of the upper layer of the ocean was in the order of 1,5 to 2 mm/year. Systematic monitoring of the sea level with altimeters started with the NASA TOPEX/Poseidon mission[3] in 1992 and continued with the Jason-1 and Jason-2 missions which confirm sea level rise producing global mean sea level maps every 10 days. Sea level rise not only causes inundation and shoreline erosion, but may also have an effect on various water-borne diseases. Extreme weather events have been attributed to global warming and many scientific studies predict that more extreme weather events will occur with increasing global temperatures. More floods, more heat waves, more droughts, more tropical cyclones. In addition, our vulnerability to such events changes as the world population is growing, urbanization takes place in coastal zones, floodplains and through the occupation of marginal lands.

On September 25th 2015, the UN associated countries adopted a set of 17 Sustainable Development Goals (SDG’s) to end poverty, protect the planet, and ensure prosperity for all as part of a new sustainable development agenda[1]. Each goal has specific targets to be achieved over the next 15 years. For each of these targets in total 232 Indicators were identified to measure progress made in achieving the 17 goals. Monitoring of the indicators is the responsibility of the national governments of the countries that have adopted the UN SDG’s. These indicators were in turn grouped into three levels of scientific understanding on how to assess them as:

There is no explicit SDG goal that relates to Energy Transition. However in the goals 7 (affordable and clean energy), goal 9 (Industry, Innovation and Infrastructure) and Goal 13 (Climate action) there are elements that link to the theme of Energy Transition. SDG Goal 7 defines that we should ensure access to affordable, reliable, sustainable and modern energy for all by increasing the share of renewable energy in the global energy mix. SDG Goal 9 aims to build resilient infrastructure, promote inclusive and sustainable industrialization and foster innovation with the aim to reduce CO2 emission while goal 13 is the so-called climate action strengthening the resilience and adaptive capacity to climate related hazards and natural disasters in all countries.

Geothermal energy in the energy mix

Radioactively generated heat in the core of the Earth is the driver of the Earth’s internal heat engine. Heat moves to the surface through conductive and convective processes. In addition, the top layer of the Earth surface is heated by solar radiation. Typical temperature gradients in the Earth crust are in the order of 25 to 30 °C per kilometre depth (equivalent to a conductive heat flux of 0.1 MW/km2). However near tectonic plate boundaries specifically near diverging plate boundaries (like in active rift systems such as the mid-Atlantic rift and the East African rift), converging plate boundaries (subduction zones; Indonesia, Philippines, Chili), and along recent volcanic in intraplate settings (Hawaii, Yellowstone/US) volcanic activity results in gradients as high as 150°C per kilometre depth. These high gradients through magma conduits trigger fluid circulation from fresh water from precipitation, ground water, lake water intrusion (meteoric water) which results in hot springs, steam vents. The amount of heat flow (heat flowing by conduction through a unit area in mW/m2) is dependent on the temperature gradient and the thermal conductivity (in W/m°C) of the medium (rock, water). Heat from geothermal reservoirs can be used to generate energy (electrical power) by using the steam to drive turbines in case of high temperature (>200°C) reservoirs. Sometimes water is injected into the geothermal system to enhance the process. In case of normal geothermal gradients (30°C /km) and low (<150°C) temperature reservoirs, heat can be used for direct use (Lund et al., 2005) involving heating of buildings, drying of agricultural products etc.

Geothermal generated energy has a number of benefits: it is renewable, it provides a stable base-load power for several decades and it is environmentally friendly with low carbon dioxide emissions compared to alternatives like fossil fuels. The downside maybe the emission of volcanic gases notably SO2, CO2 and H2S which may be enhanced due to geothermal exploration and which are associated with respiratory mortality. In low enthalpy systems, there is the competition between aquifers used for shallow geothermal energy and for the production of drinking water. Geothermal activity gives rise to temperature variations beyond natural conditions, which adversely affects groundwater quality. Groundwater potentially can be polluted from reservoir fluids but also corrosion in the pipeline system used for exploration can adversely affect groundwater quality. Lastly, geothermal energy production can result in surface deformation. Lastly, geothermal energy production can result in surface deformation. Geothermal energy provides approximately 0.4% of the world global power generation with a growth rate of 5%. At present, the largest providers are in USA, Philippines, Indonesia, Mexico and Italy. To put this in perspective, solar energy plays a very limited role in global power generation (<0.2%), but it has a very high growth rate of 25-30%, especially in USA, Spain, China, Australia and India.

A recent survey[1] shows that a total of 24 countries now generate electricity from geothermal resources with a total installed capacity worldwide of 10,898 MW (corresponding to about 67,246 GWh of electricity). Germany, Papua – New Guinea, Australia, Turkey, Iceland, Portugal, New Zealand, Guatemala, Kenya, and Indonesia have increased the capacity of their power plant installations by more than 50% with respect to the year 2005. The top five countries for electricity from geothermal resources are USA, Philippines, Indonesia, Mexico and Italy and the top five countries that realized an increase above 100 MW with respect to 2005 are USA, Indonesia, Iceland, New Zealand and Kenya. In addition, nearly 40 countries worldwide possess sufficient geothermal potential that could be exploited to satisfy the energy demand of the country; the largest are Indonesia, Philippines, Peru, Ecuador, Iceland, Mozambique, Costa Rica and Guatemala. In terms of installed capacity as a factor of inhabitants Iceland (>1900 MWe/mill.people) and New Zealand (150 MWe/mill.people) are world leader (USA reaches 10 MWe/mill.people). 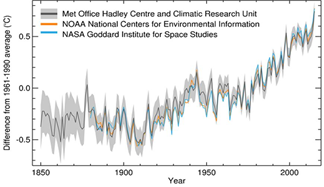 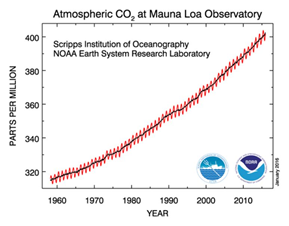 Figure 5 CO2 in the atmosphere measured by NOAA at the Mouna Loa (Hawaii) observatory showing a steady increase. 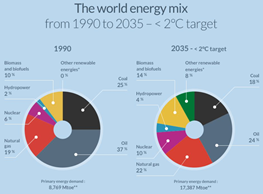 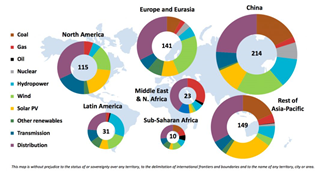 Figure 8 Investment in electricity generation and networks by region and type in 2015 after the World Energy Investment (2016) by the IEA[1].